Don't get caught out! 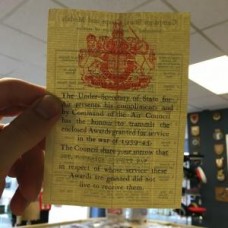 It's never a nice thing to have to tell someone a group they've had in their collection is wrong. Unfortunately today we had to do just that. It is even worse realising the "dealer" they bought it from purposely deceived them. This has been confirmed by the fact that our customer (who we'll call Mr. H) has two other groups from the same seller with the same forgery. It's prompted me to write a news article about it (with permission from Mr. H) in the hope that we can stop someone being conned again.

The group in question is supposedly to a Sgt. Frederick Bennett, 97 Sqdn R.A.F. who was killed in action 27/4/42 in an action that claimed the lives of the entire crew and saw the pilot awarded the D.F.C. Medals include the 1939-45 Star, Air Crew Europe Star and the 1939-45 War Medal. The group comes with A.G. brevet, box of issue and condolence slip.

I think any collector or dealer will already be cautious when it comes to an Air Crew star. We all know they are one of the most commonly faked medals out there. So when Mr. H contacted us about selling the group he made a point of stressing that the Air Crew was right (which it is). Unfortunately we found when the lot arrived the condolence slip is not genuine.

We believe the fakers have bought boxes with the surnames of casualties, searched for Common Wealth War Graves entries where no parents’ names are listed. Thus enabling them to build a group around the box and fake a condolence / entitlement slip to go with it. With no names listed for the parents of the deceased, as long as the last names match, there's no easy way of knowing that the box doesn’t belong to the attributed service man / woman. With further research we have found Sgt Bennett's parents were Frederick and Rebecca. The box is to a J.H. Bennett.

Once we had told Mr. H the slip was a fake he checked two other Royal Air Force casualty groups he had purchased from the same dealer and both also have faked condolence slips.*

We have seen forged slips before and one of the tell-tale signs is the paper they are printed on. The forgers need to use laid paper to get as close a match as possible to the original style. More often than not they use Conqueror paper. If you hold a faked slip to the light you will notice lines that are not there on an original. In the case of Mr. H’s Air Crew group you can clearly read a Conqueror water mark at the top! (see picture).

There are many ways to spot a fake slip. It is often helpful to have a confirmed genuine version to compare to (obviously this is not always possible). Try to have knowledge of common signs to look out for before buying. Always ask questions and be vigilant with every part of a group, do not overlook paperwork. We will all most likely be caught out at some point, dealers and collectors alike and of course there are always differences of opinion. The best advice I would offer is to only buy from reputable dealers. You should have contact details from them in case there are questions in the future and they should ALWAYS accept returns for any reason.  Show any purchases to other trusted collectors and dealers, most dealers should be happy to give advice for free. With a few checks Mr. H could have avoided having a group (that should have been valued in the region of £550 to £650) which is now only worth the break down cost of the medals.

*It's worth noting that the dealer in question is no longer trading otherwise the Police would have been notified. Mr. H has had the groups in his collection for over 16 years so there is little we can do now. Whilst we feel it important to put a stop to such practices we are not in the business of mudslinging so we are not naming names where there is nothing to gain by doing so. If you have any item/s that you are concerned about we are always happy to offer our opinions on authenticity. Feel free to contact us if you have any questions.